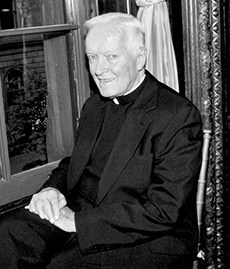 I love that your “first name” to most people is “Father” (not Gene) because you have been like a “father” to me and to so many others…..sage advise, gentle nudges, many laughs, occasional disagreements, but always with a warm heart and love.  I find myself telling “Fr. Prior Stories” all the time.  When I tell these stories to people who do not know you, people ask who you are and want to know more about you.  I answer, “He is one of my best friends.”  When they want to know more I tell them, “Imagine a priest as popular as Springsteen and you may start to grasp the influence he has had on so many lives.”  Today’s celebration is a “terrific” testament to all you have done for so many people, and as we look around it is amazing to realize that but a fraction of those who wanted to celebrate your 80th birthday are here in person.

All the very best,
Tony Oroszlany
Class of 1987

The Loyola Family treasures you; more specifically, my class.  Personally, I wanted to say thank you for your hand in raising us as men and women for others by applying a Jesuit recipe of discipline, wisdom, kindness and humor.  You will be one of my favorite memories of high school and one of the most important examples of a foundation in my education – cura personalis

A gentleman of enormous practicality, softened by Irish wit;
a mentor—friend with contagious intellectual curiosity;
a spiritual man, living his life in God’s light,
and leading by quiet example;
a New Yorker par excellence, who reflects the best of this beloved city;
a once in a lifetime personality who is loved by so many.

My Freshman year at Loyola you gave me JUG for chewing gum after lunch.  (Excuse me for wanting to have minty fresh breathe….j/k!)  Unlike any other Loyola student whose usual JUG punishment is to sit on the steps after class, I couldn’t leave until I completely memorized Frost and recited it perfectly in your office.  Well, you got a top notch performance from a reigning Speech Champ and I memorized a poem whose words taught me a lesson of inestimable value far beyond “no gum chewing at school.”
“The road less traveled…” from that moment on has always been the road I have taken.  If one does not challenge themselves, one can never truly know greatness.  Thank you for being a wise teacher.

While I don’t get back as often to Loyola as I’d like, when I think of Loyola, I immediately think of you.  You had a great influence on my life and my classmates.  You instilled values in all of us that we will have forever.  You are the personification of Loyola!

Father Prior is the most beloved person I have known.

When I informed Father Prior in about 2000 that my brother, Richard O’Brien (Loyola 1973), was very ill, Father Prior immediately began sending Richard letters and bulletins from Loyola - many of them.  An awesome reaction from a beloved, awesome priest and man.

Two favorite memories of Father Prior:
One of my favorite Fr. Prior memories is from the early 2000s. I was with several Loyola ‘94 friends at Arlene’s Grocery in the East Village to see a fellow classmate, Joe Tiernan, play with a band that night.  I was standing talking to our former teacher and friend, Mike Lupinacci, when all of a sudden, to my surprise and delight I saw Fr. Prior’s mug pressed against the window peering into the bar. I made my way over to the door to greet him upon his entry, thinking this wasn’t his typical establishment and that he may not feel comfortable coming in.  By the time I got to the door, Fr. Prior was already hugging the bouncer. It just so happened that the bouncer was another Loyola alum from a decade ahead of me. You just never knew where Fr. Prior would show up and whom he would know! But what you did know is you were sure to get a warm, welcoming greeting!
I vividly recall a visit with Fr. Prior in late May of 2007. While I visited him regularly at Murray Weigel, I was really nervous about this particular visit.  I was going to ask him to be the recipient of our Michael J. Armstrong Memorial Foundation Courage in Leadership Award at November’s Foundation event. I so hoped Fr. Prior would agree to accept the award, as there was truly no one more deserving, but I also knew that he was incredibly humble and would be hesitant to commit. As a result of his cancer treatments and surgery, Fr. Prior was without a voice at this point.  Upon being asked to receive the award, he mouthed, “How could I refuse?  I am honored.  Thank you very much.  This lifts my spirits.”  I told him that we would love for him to be there, but that if when the time came he didn’t feel up to it, we would understand.  I mentioned that the date of the event was November 9th to which he responded “That’s the day before November 10th” with a wink and a smile….letting me know in his ever-so charming way that he knew my birthday off the top of his head.  His mind certainly never failed him! Fr. Prior passed two months after that visit and we are grateful to Tony Oroszlany for accepting the award posthumously on behalf of Fr. Prior.

I made it through the first three years of Loyola without ever receiving JUG.  Fr. Prior discovered this fact and then decided to make up for lost time.  One day, prior to the ISAL Championship basketball game, Fr. Prior told me that for JUG, I was to meet him in the gym.  When I arrived, there was a freshman student (Kevin) there as well.  He explained that I would have to shoot three pointers for 35 minutes, and that Kevin would rebound for me (Fr. Prior loved basketball).  He left us to work.  Five minutes in I told Kevin that he did not have to stay and I would be fine on my own, so Kevin left.  Ten minutes later Fr. Prior was back in the gym with Kevin, a little angered, that I told him he could leave.  My punishment - Saturday JUG.  Now Saturday JUG was saved for serious offenders.  I was not excited about reporting to the school at 8am on Saturday.  In hindsight, it was a very special day of one-on-one time with Fr. Prior.  We proceed to take the school van to the secret bulk candy location to buy inventory for the machines.  We argued about what candy would sell better, discussed whether the Mets had any chance that year, and his favorite restaurants on the upper east side.  We came to an understanding that day, no more JUGs, but that if he ever needed help I would be there to lend a hand.  Such a small moment over the course of four years, but one I will always treasure and never forget.  That day was the start of a true friendship that would continue for 13 more years.  Best JUG I ever had.

I became closer with Father Prior many years after I graduated from Loyola, after my marriage and my four children, two from my wife's previous marriage.
Father Prior became my confidant after I purchased a co-op very close to school. He visited us at home when we were there and my wife would bake him desserts (he had a sweet tooth!) that we would leave for him at his residence in Loyola.
My communion will remain confidential, but I can honestly say that our conversations have since resounded in my life, in my faith in Jesus and my Jesuit education.